Here are some details to share about a new action camera that DJI will shortly release.

All admired the unique design of the Action 2, but this small magnetic camera frequently overheated. The Action 2 recorded to internal storage, and backing up to microSD required inserting a module and frequently required a lengthy wait. This was one of the main complaints.

According to rumors, DJI plans to introduce a brand-new item that can fly both inside and outside.

Recently, @DealsDrone reported that the DJI Action 3 camera would return to the traditional action camera shape rather than the compact, cube-like modular form used by the Action 2.

DJI Action 3 will be released in mid-September, and its appearance is almost same as Osmo Action pic.twitter.com/piOJMcg4dF

The image below now supports that assertion: 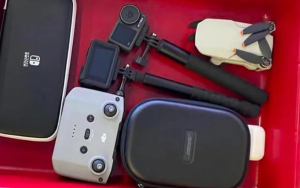 Additionally, it is said to be possible to use DJI’s action camera underwater without a waterproof casing. Compared to earlier generations, it would have longer battery life and wouldn’t overheat.

Native vertical shooting would be supported by the DJI Action 3 camera. DJI has put a lot of effort into this shooting mode in an effort to cater to users who produce footage expressly for social media platforms.

Next Wednesday at 8 a.m. EST, DJI’s “searching for those who go beyond” event will reveal further information. Keep checking back for updates!